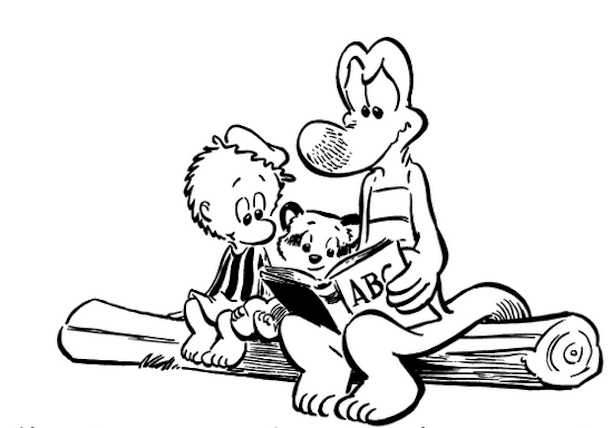 Walt Kelly, the creator of the iconic comic strip Pogo, was born in Philadelphia on August 25, 1913. When he was two years old, he moved with his parents, Walt Sr. and Genevieve, and his sister, Bernice, to Bridgeport. The Kellys settled in a house at 457 East Avenue on the East End, half a block south of Boston Avenue. His parents both worked at the General Electric plant a short distance away.

Kelly recalled his youth in Bridgeport with great fondness many times in interviews he did later in his life. In a book about Kelly, Kerry Stoper made note of Bridgeport’s “colorful dialects, casual tolerance and working class solidarity,” themes that Kelly eventually featured prominently in Pogo. In addition, Kelly and his parents were supporters of Jasper McLevy, the Socialist who served the first of his twelve terms as Bridgeport’s mayor in 1933. It was Kelly’s father who taught Walt Jr. to draw and he developed his skills during the many hours he spent confined to the family home recovering from a series of debilitating illnesses. At Bridgeport’s Warren Harding High School, he honed his art further by drawing for the school newspaper and yearbook. He was also a high school correspondent for the Bridgeport Post, contributing articles to the paper about sports and school news.

Not long after graduating high school in 1930, the Post hired Kelly as a crime reporter. He drew cartoons for the editorial page as well, including a detailed comic history of P. T. Barnum, who lived much of his life in Bridgeport. The Barnum motif was another that Kelly used in Pogo in the form of a circus impresario named P. T. Bridgeport.

Kelly fell in love with Helen DeLacy and in 1935 pursued her to California, where he also landed a job at the Walt Disney Studio. He worked on a series of Disney’s cartoon productions, married DeLacy, and returned for a time to Bridgeport, where the couple’s first child was born in 1942. The Kellys soon moved to New York City, however, and Walt shifted his focus to comic books, where Pogo made its first appearance.

The New York Star and the Emergence of Pogo 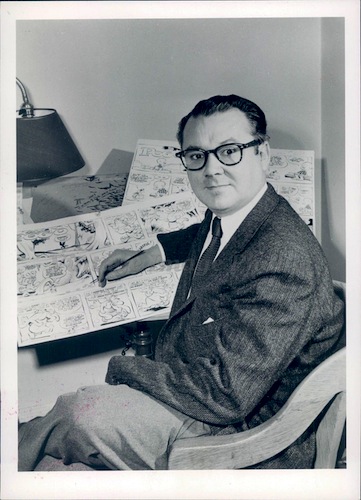 In 1948, Kelly went to work for the New York Star, a radical daily newspaper that was the successor to Marshall Field’s PM. PM had featured Barnaby, a satirical comic strip drawn by Crockett Johnson, whose influence can be seen in Pogo. It was in the pages of the Star that Pogo, with its assortment of anthropomorphic animal characters, became a regular feature. The main character was an opossum named Pogo and other regulars were Albert the Alligator and Churchy LaFemme.

Kelly used the strip, in part, to lampoon the powerful and bullies of all persuasions. Animal characters represented easily recognizable figures of the day such as Senator Joseph McCarthy, who was satirized as Simple J. Malarkey, a blowhard, shotgun-toting bobcat. When the Star went under in 1949, Kelly syndicated Pogo in newspapers throughout the United States. The strip proved enormously popular and ran for 26 years. Beginning in 1951, Kelly published the first of over 20 books of Pogo reprints.

The Kelly family lived for a while in Darien until Walt and Helen divorced in the early 1950s. He returned to New York City, married Stephanie Wagonny, and became a regular public speaker, proving especially popular on college campuses. During this time, Kelly also maintained close friendships with fellow cartoonists Milt Caniff, the creator of Terry and the Pirates, and fellow Bridgeporter Al Capp, creator of Lil Abner.

“Earth Day: We Have Met the Enemy and He is Us” Though by 1970 Pogo had fallen somewhat out of style, it experienced a revival of sorts when environmentalists organizing the first Earth Day adopted as their own the most famous line from the strip: “We Have Met the Enemy and He is Us.” Recognizing the sentiment of the event as akin to his own, Kelly illustrated a widely circulated poster advertising Earth Day and its many events.

After Stephanie’s death, Kelly married Selby Daley, an illustrator who carried on with Pogo after Walt’s death. Kelly spent several years in failing health and died of complications from diabetes in 1973 at the age of 60.