And They’re Off!: Harness Racing at Charter Oak Park 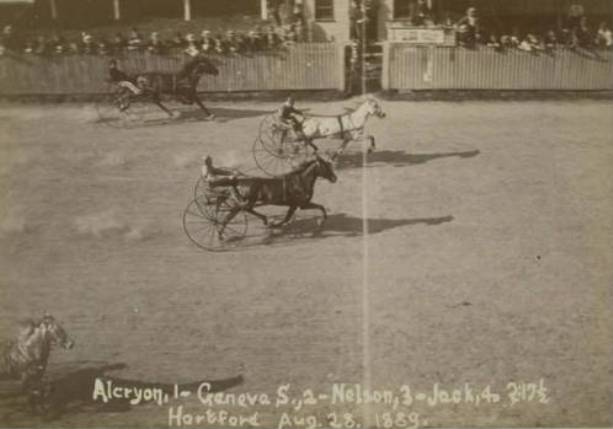 Horses crossing the finish line at Charter Oak Park, 1889, 2000.198.15 Photography was first used to record the finish of a race in 1881, but the practice did not become common until the 1930s - Connecticut Historical Society

by Andrea Rapacz for Your Public Media

The day was cool and 10,000 spectators crowded the stands at Charter Oak Park to see the gray stallion Alcryon come from behind to beat the great trotting mare Geneva S. and the flagging favorite Nelson in the Charter Oak Stakes on August 28, 1889.

Charter Oak Park opened in 1873 near the Hartford/West Hartford line. In addition to a race track, it also came to include Luna Park, a popular amusement area, and the grounds served as the venue for the Connecticut State Fair, an annual two-week event.

The mile-long race track at Charter Oak Park was especially designed for harness racing, though in the early 1900s it was also the site of bicycle and automobile races. It was one of the best-known tracks in New England and many famous horses and drivers raced there. Harness racing, a type of horse racing where the driver sits on a two-wheeled sulky attached to the horse by a harness, was wildly popular in 19th-century America. The horses are required to run with a specific gait—either pacing (when the front and back legs on the same side move in unison) or trotting (when the front and back legs on opposite sides move together). The horses in the images for this article are all trotters.

An Early Example of the Photo Finish

Sometimes horse races are so close that it is difficult to determine who won. Today it is standard practice for a photo to be taken at the end of every race showing the exact positions of the horses as they crossed the finish line. In the 1880s, this technology was in its infancy and the photograph showing the conclusion of the 1889 Charter Oak stakes, which Alcryon won by a head, is among the earliest ever taken. The very first harness race ever filmed was shot by the Edison Manufacturing Co. at Charter Oak Park in 1897.

Already by the 1920s, Charter Oak Park was finding it difficult to compete with other forms of entertainment. When Connecticut instituted anti-betting laws in 1925, the racetrack was doomed. It fell into disrepair and was closed in the 1930s. Today, the area bound by New Park Avenue and Charter Oak Boulevard is occupied by strip malls and big box stores.

Andrea Rapacz is currently the Head of Interpretive Projects at the Connecticut Historical Society and has been part of the CHS exhibitions staff since 1995.