Linkedin
April 12, 2018 • An Orderly & Decent Government, Pre-Colonization and Settlement Up Through 1763, Belief, Windsor 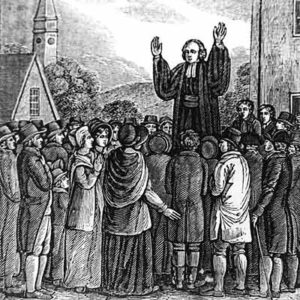 As the pressures on available land mounted, the “proprietors” in each town (the original settlers or their descendants) fought to retain control over undistributed town land and called upon the General Assembly to uphold their traditional rights.

In the Great Awakening, a religious revival of the 1740s, impassioned evangelical ministers like George Whitfield attracted crowds of thousands. Convinced the colony had strayed dangerously from its early religious principles, they cried out for a return to the strict Puritanism of the 17th century. Whitfield’s popularity threatened traditional church leaders, and the General Assembly promptly banned traveling preachers and even deported one.

“Bare naked power is an awful thing and very unamiable to a people that have been used to be free.”

“No one dares, and few in power are disposed, to punish any violences that are offered to the Authority of the Act – in short, all the springs of Government are broken and nothing but anarchy and confusion appear in Prospect.”