Lake Compounce: Bringing Amusements to the State’s Residents Since 1846 Bristol’s Lake Compounce is the oldest continually operating amusement park in the US and has been open every summer since 1846. The park continues to operate despite a long and checkered history brought on by dramatic shifts in American culture. Today, the park offers more than 50 rides, the largest water park in the state, live shows, and many other forms of entertainment. The history of Lake Compounce can be traced back to 1846, when Gad Norton opened the area to the public. In an effort to make a profit and attract interest, Norton hired a scientist to perform experiments, including some with explosives, at the lake. Though the explosive experiments were unsuccessful, the large turnout of onlookers impressed him. He quickly developed the area into a small park, complete with picnic tables, a swimming area, and a few rides. In 1851 Norton joined forces with Isaac Pierce, who had fared well in the California Gold Rush of 1849, and over the next few decades, the park met with mild success.

At the end of the 19th century, new technologies combined with changing economic and social conditions fueled the park’s growth. In 1895, a trolley line connected Lake Compounce to an emerging network of inexpensive, public transportation that allowed those living in the state’s burgeoning cities to more easily reach outlying areas. At the same time, increased leisure time and spending power allowed workers to seek out commercial amusements in their spare time.

Entertainment for the Masses Different from other forms of entertainment, amusement parks offered the public opportunities for participation. As John Kasson documented in his study of amusement parks at Coney Island, visitors found an artificial world that seemed to challenge the authority of traditional Victorian culture, with its emphasis on morality and control. Though Lake Compounce did not capitalize on this to the same extent as other amusement parks, it nonetheless created an escape from reality, employing new technologies of the time in the form of thrilling and fanciful rides. In 1914, the park added a carousel and its first electric roller coaster. As mass culture continued to develop, Lake Compounce fared well, with its success peaking in the 1920s.

The 1930s ushered in the Great Depression, which led to struggles for amusement parks throughout the country. Though revenues were down, Lake Compounce weathered the Depression years. After a resurgence during the 1940s, the park met with significant challenges in the 1950s and 1960s, when the emergence of television and the popularity of the automobile presented new options for leisure time. With this new competition, amusement parks closed all across the US. At Lake Compounce, the number of visitors sharply declined and the park’s popularity diminished. In 1966, Edward G. Pierce, Isaac Pierce’s grandson, sold his interests back to the Norton family, and the park remained under their control for the next 19 years. Lake Compounce stayed open but didn’t meet with great success as it struggled to keep up with popular new attractions, such as Disneyland, which redefined the way that amusement parks served the public by focusing on family-oriented fun.

In 1985, the Norton family sold Lake Compounce, and the decade that followed was the worst in the park’s history. From 1986 to 1996, the park had four different owners and went through significant financial troubles. From 1992 to 1994, the park only opened on Labor Day weekend, and by the mid 1990s, the park was in serious danger of closing for good. 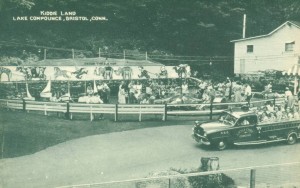 In 1996, Kennywood Entertainment, a family-owned company that already operated three parks in Pennsylvania, purchased Lake Compounce. The new owners, armed with an $18-million loan from the state, quickly improved the park, and when Compounce opened on Memorial Day in 1996, there were 20 new attractions. Since then, Lake Compounce has continued to expand.