Detail of the Culper Spy Ring Code - Library of Congress

Like many children raised at a time when traversing the world’s oceans was the ultimate adventure, Caleb Brewster dreamed of going to sea. It’s not difficult to imagine young Caleb standing on the shore near his childhood home in Setauket, New York, looking north across Long Island Sound to Connecticut. He undoubtedly dreamt, too, of sailing the far greater expanse of the Atlantic Ocean to the east, out of sight at that distance but alive nonetheless in the imagination of a young boy. Brewster eventually realized his dream and, in so doing, helped shape the destiny of the new United States of America.

Brewster was born in Setauket in 1747 and signed on to a whaling boat as a young man. By the time hostilities between colonial revolutionaries and the British Crown escalated in 1775, he was an expert seaman. He was especially familiar with the many intricacies of the northern Long Island coastline, as well as the 18-mile stretch north to Connecticut, particularly Fairfield and what is now Bridgeport. Among Brewster’s acquaintances when he was a young man were members of the Tallmadge family, also of Setauket. Benjamin Tallmadge was a graduate of Yale who became General George Washington’s chief intelligence officer and eventually rose to the rank of colonel. Tallmadge was a classmate of Nathan Hale in college and, in the early years of the Revolutionary War, helped organize the Culper Spy Ring.

Brewster’s friendship with the Tallmadges and his expertise as a seaman made him a natural for recruitment to the Culper Ring. (Culper was the phony name used by Abraham Woodhull, another Setauket native, who was one of the ring’s agents.) New York City was a strong British base of operation during the war and the Culper Ring proved instrumental in securing information of vital importance to the revolutionary cause, and, according to some historical accounts, even played a role in uncovering the spy work done by Benedict Arnold on behalf of the British.

With Tallmadge stationed in Connecticut and most of the spy work transpiring in New York City, Brewster’s role was to transport information across the sound from Long Island. Information secured in New York passed to several members of the ring and eventually to Brewster in Setauket. Brewster then sailed to Connecticut and delivered the information to Tallmadge. Frequently, Brewster then sailed back to Long Island to deliver whatever reports and supporting documents Tallmadge gave to a courier who relayed them to Washington via a network of other couriers. 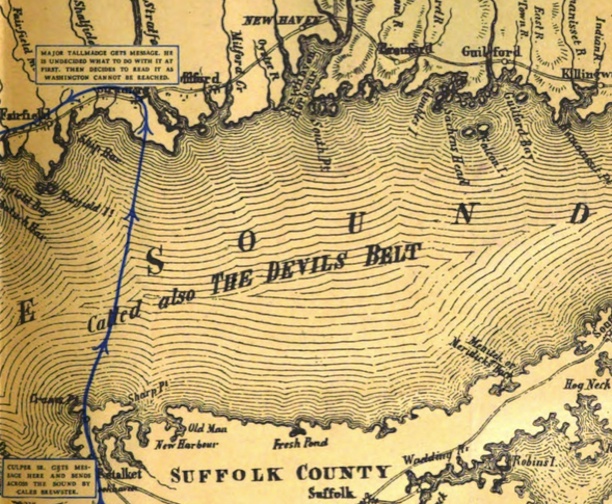 “Culper gets message here and sends across the sound by Caleb Brewster.” Detail of map from General Washington’s spies on Long Island and in New York by Morton Pennypacker, 1939.

The security of New York City and western Long Island were of critical importance to the British and they had a highly developed counterintelligence force throughout the area. On one occasion, a British officer discovered Brewster while he waited to receive information from another member of the Culper Ring. Brewster knocked the officer from his horse and forcibly took some of the man’s possessions before fleeing, thus making it appear that the confrontation was simply a robbery rather than a matter of espionage.

Despite all the precautions they took, some of those involved in the Culper Ring fell under British suspicion. In Brewster’s case, the British knew his name, they knew he lived and operated in and around Setauket, and some accounts indicate they knew he was the primary courier between Long Island and Connecticut. The British never captured him, though. Brewster had a reputation for being extremely brave and some accounts indicate several occasions where he effectively battled British ships far larger than his whaling boat. Of equal importance were his resourcefulness, his seamanship, and his familiarity with every cove and eddy on both sides of the sound. In combination, these enabled him to carry out his work aiding the revolutionary cause.

After the Revolutionary War, Brewster settled in Connecticut and became a blacksmith and a farmer. He was also, for many years, an officer in the United States Revenue Cutter Service, forerunner of the Coast Guard. He died in 1827 at the age of 79 in a section of Fairfield that is now part of Bridgeport. There is a street named after him in the Black Rock section of Bridgeport near where he lived.