Visitors to Willimantic, a former city now consolidated with the town of Windham, may wonder why the bridge that spans the Willimantic River is so festively decorated with frog sculptures. The bronze sculptures by Leo Jensen were part of a design for a new bridge approved for construction in the 1990s, but the answer to why frogs were incorporated into the design lies in the story of the famous Windham Frog Fight (or Fright), which occurred in June of 1754. It is a story that still provides Connecticut residents with an opportunity to laugh at themselves and, in particular, at their susceptibility to spooky phenomena.

A rational explanation for the events that occurred on that June night has long been in place, but the existence of such an explanation has hardly put an end to the storytelling. In 1754, Connecticut residents lived in fear—of frontier turmoil and war with the French and Indians; of the devil lurking in the wilderness. Any number of natural phenomena easily frightened the residents of Windham. 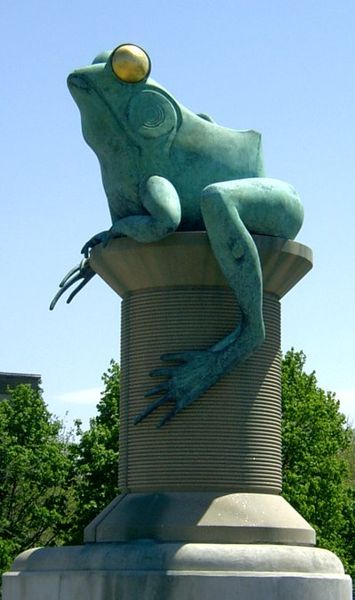 According to diarists, local historians, and storytellers, it was well after the residents of Windham had gone to bed on that June night that they heard a dreadful sound throughout the surrounding hills. Some believed it was the screams of warring tribal people or, perhaps, the bellowing trumpets of Judgment Day, and some residents reported hearing their names being called out at high volume. Successive parties of brave men ventured outdoors to investigate the origin of the roiling noises and determinedly fired off their muskets in its general direction. As the night’s darkness gave way to morning light, it became clear that the sound was coming from the bottom of a hill somewhere to the east of town.

Daylight and the morning’s quiet brought about a gradual and startling revelation of the truth: a long-standing drought had reduced the entire area’s standing water to a single small pond and every frog for miles around had descended on the Windham area in a desperate search for water. The jostling and battling of these frogs, and their struggle to gain access to the area’s only remaining water, had been the source of the previous night’s unearthly din. In the aftermath of the night’s melee, hundreds of bullfrog corpses littered the landscape, hence the tradition that the Frog Fright was, indeed, brought about by a Frog Fight. In the ensuing years, the event was—and has—continued to be commemorated by tales, songs, and decorative traditions, including that of the giant green frogs that gambol playfully at both ends of the Willimantic Bridge.

Known officially as the Thread City Crossing, the bridge over the Willimantic River opened in 2000 and replaced an 1857 arched stone bridge that is now a garden walkway within the Windham Mills State Heritage Park. The newer bridge, decorated with large spools in recognition of Willimantic’s long history of textile and thread manufacturing, sports its 11-foot-tall bronze frogs in commemoration of one of the city’s most vivid legends.