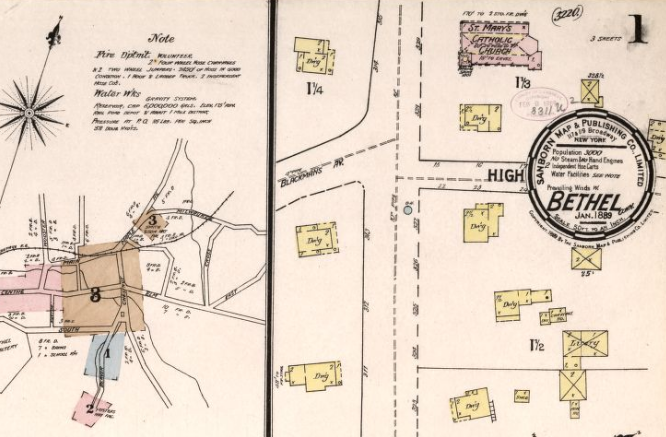 Developed in Europe in the late 1700s, fire insurance maps were originally created for underwriters so that they could assess the fire liability of properties that their companies insured. In the US, the Sanborn Map Company, founded in Pelham, New York, became one of the best known producers of these large-scale maps. Beginning in 1867, Sanborn issued fire insurance maps for communities across the United States, Canada, and Mexico.

Today, Sanborn Fire Insurance Maps from decades past provide historians and others with useful evidence about the layout, growth, and development of cities, towns, and neighborhoods. For example, the maps provide detailed information about buildings, including their dimensions, construction details, number of stories, property lines, and addresses. The maps also indicate the surrounding natural and built environment by illustrating such features as rivers and canals as well as railroad corridors and the location of water supplies. A Good Spot and a Healthy Place: A Short History of Charles Island
Norwich in Perspective
Bird’s-eye Views of Rockville Chart Textile Industry’s Growth
A Beautiful and Goodly Tree: The Rise and Fall of the American Elm
A Puritan Landscape New Haven Town Green
Hidden Nearby: Camp Columbia State Park in Morris
A Bird’s-eye View of Moosup
A Public Responsibility: Conservation and Development in the 20th Century
The Thimble Islands – Little Islands with a Big History
Designed to Heal: The Connecticut General Hospital for the Insane